These days when you go in search of Mahogany lumber it is hard to say what you will get.  Product marketeers have slapped the Mahogany name on just about any reddish-brown species around the world and it seems that all one need do is add a regional adjective to suddenly have a legitimate Mahogany product.  This makes it difficult when buying to know what to look for and which species is best for your specific application.  Confusion, name calling, and bitterness ensue as one person’s great experience with Mahogany is tempered by another’s horrible experience.  Technically these varied species all fall under the same botantical family Meliaceae, but with so many species lumped under one moniker, it is possible for a woodworker to run into different working properties in the same stack of Mahogany at the lumber yard.  In the coming weeks, I will take each of the major Mahogany genera and discuss each in turn.

So what better place to start than with “Genuine” Mahogany?

Several species exist under the Swietenia genus that could qualify S. macrophylla  and  S. humilis are the best known varieties.  Commonly referred to as Genuine, Honduran, Big Leaf, or American Mahogany these species grow throughout Central America and Northern South America.  Note that this does not include the other Caribbean species such as S. mahogani or Cuban Mahogany that is no longer available due to over harvesting in the 18th and 19th centuries.

Genuine Mahogany has been prized by furniture makers since the 1700s and has faced some major over harvesting.  As such it is now a CITES (Convention on International Trade in Endangered Species) appendix II listed species.  This states that current trade level could endanger the longevity of the species and must be regulated.  This applies only to Central and South American Mahogany so plantations in Indonesia, Fiji, and The Philippines are not regulated.  Mahogany is a hearty tree that grows quickly and aggressively and it has been found that plantation Mahogany is often of a poorer quality because without an establish forest canopy the tree branches quickly and often yielding unpredictable grain and knots.  Even when pruned, frequent pin knots are common signs of plantation Mahogany.  The fast growth unchecked by an old growth forest yield a lower density and light color as well.  Essentially, these plantation attempts need more time to establish holdover populations so that new growth can grow at a more controlled rate.  To date the only area that seems to be able to replicate good Genuine Mahogany is the Fiji Islands.

Despite the massive over harvesting in the past few centuries, recent regulation has had a major impact on Mahogany forests.  Government regulation still closely protects and limits the harvest of the species but for the most part, sustainable forestry is the norm and Mahogany is a healthy species with a bright future.  I think that perceptions that using Mahogany is not responsible have not caught up to reality and visits to Bolivia, Peru, Uruguay, and Brazil tell a different story.  Saw mills and importers are quite ready to claim Mahogany is in plentiful supply because government regulation makes it still very difficult, expensive, and time consuming to obtain.  Perhaps this is best so we don’t repeat history. 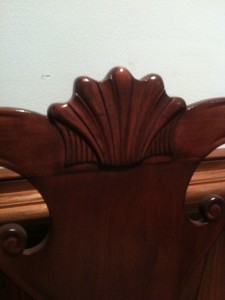 The working properties of Genuine Mahogany are truly wonderful.  The lumber is known for consistent reddish-brown color, straight grain, and constant density.  While some ribbon grain, flame,  and figure from crotches are found, it is mostly an unfigured species.  This blank palette of sorts lends itself well to surface ornamentation like carving, fretwork, and moulded accents.  It is easy to see why Mahogany was so highly prized during the 18th and 19th centuries when the prevailing furniture styles embraces a lot of carved and embellished surfaces.

The consistent grain and density makes Mahogany work extremely well by hand and by machine.  It is considered one of the best carving woods around and pieces of it will often grace the benches in beginning carving classes.  It is of a medium harness with a 950 Janka rating so it will not blunt your tools.  Best of all the consistency in appearance means that it will take a finish predictably those it’s open pore structure means that filling is required for a glass smooth surface.

We must remember that Genuine Mahogany is still a tree and despite it’s reputation for consistent color and grain pattern, some variation will exist due to regional climate and soil differences.  For the most part, it is all the same genus and species and working properties will be very favorable.  The biggest change is in color and silica levels that can add a shimmer to the wood (as well as dull your tools)

Bolivia and Peru produce some of the finest Genuine Mahogany these days with a deep rich color and slightly higher density.  That being said there is a significant change in colors you move from North to South.  Santa Cruz Mahogany from the south will be much lighter with more pink whereas the Northern varieties will be a heavier, deep rich red-brown.  The same variation can be found in greater supply in Brazil since the country covers a much wider area.

So while you may be getting the same “Genuine” species with excellent working properties, it is up to the woodworker to determine the best color match from the board available at your lumber dealer.  Seriously though, what fun would it be if all the boards looked alike?

One Response to “Mahogany Species Run Down: Genuine Mahogany”